THE YACHT HENRY RASMUSSEN BUILT FOR HIMSELF 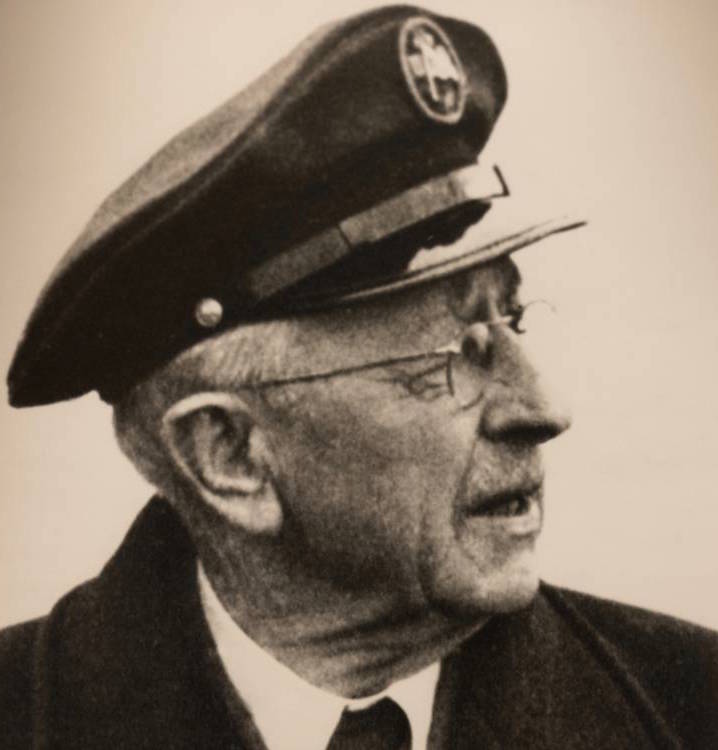 Following the desire for building the perfect yacht for himself, Rasmussen built AR in 1936. He chose to design and build her as a “Seefahrtkreuzer”, a racer-cruiser class which was established in Germany 1927 to replace the “National Cruiser”-class, which was not well suited for offshore racing. The “Seefahrtkreuzer” superbly combined comfort, seaworthyness and speed and in turn became a huge success. When AR’s class was substituted by the KR-formula after WWII, many sailors saw this as the end of combining ellegant aesthetics with great performance in German yacht design.

Rasmussen created AR as a 125sqm Seefahrtkreuzer. A 100sqm was not big enough for him and his family concerning space down below and neither a 150sqm fit, as it was not so easily handled by a small crew. Presented for the first time to the public during the 1936 Olympic Games in Kiel, AR was considered by many of the curious guests as an Abeking & Rasmussen masterpiece.

Seeing her for the first time we were struck by the elegance of her lines, the incredible craftsmanship and the atmosphere of her interior. After her racing life before WWII, the years in England after the war and the following 25 years of yacht-school-service with an unbelievable amount of miles on her back, she did look anything but loved, inside out. But she was an Abeking & Rasmussen, a label that ranked very high in our yachting hall of fame in regards to building quality and design. So we trusted in her „inner values“. We never ever regretted this trust. Her construction strength to this day proves itself as excellent and her sailing performance concerning speed and comfort at sea has outranged our imaginations by far. 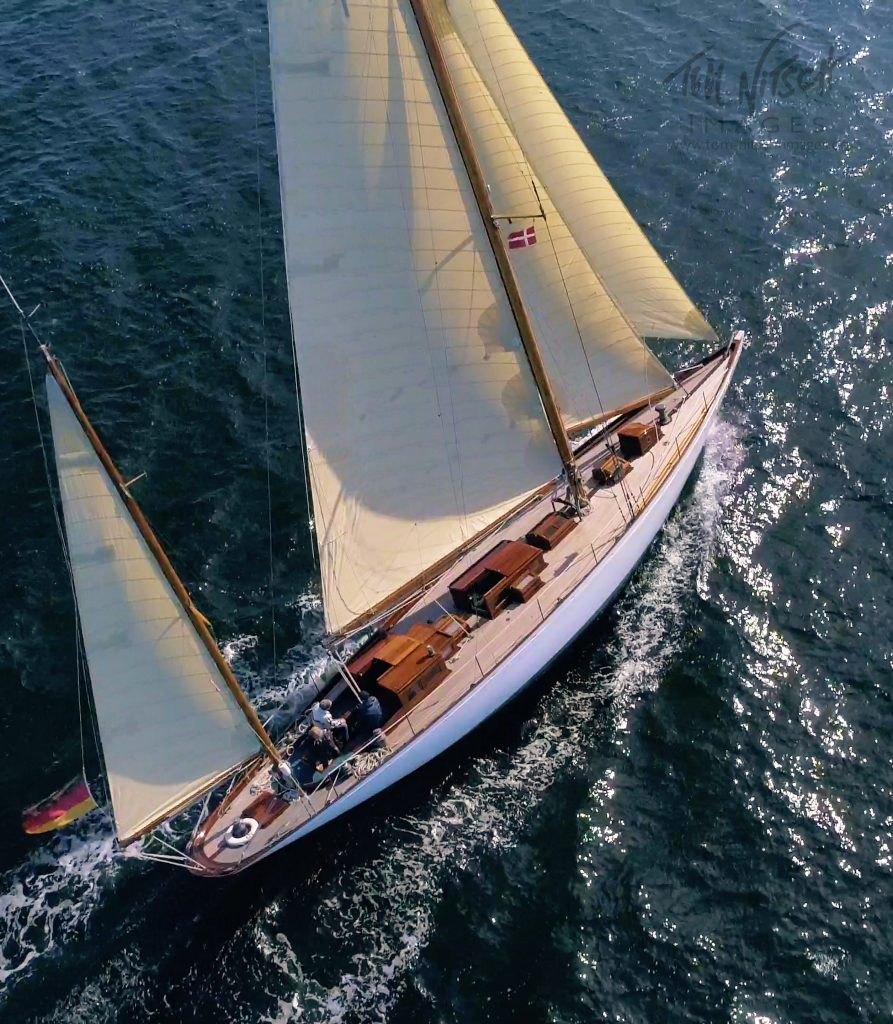 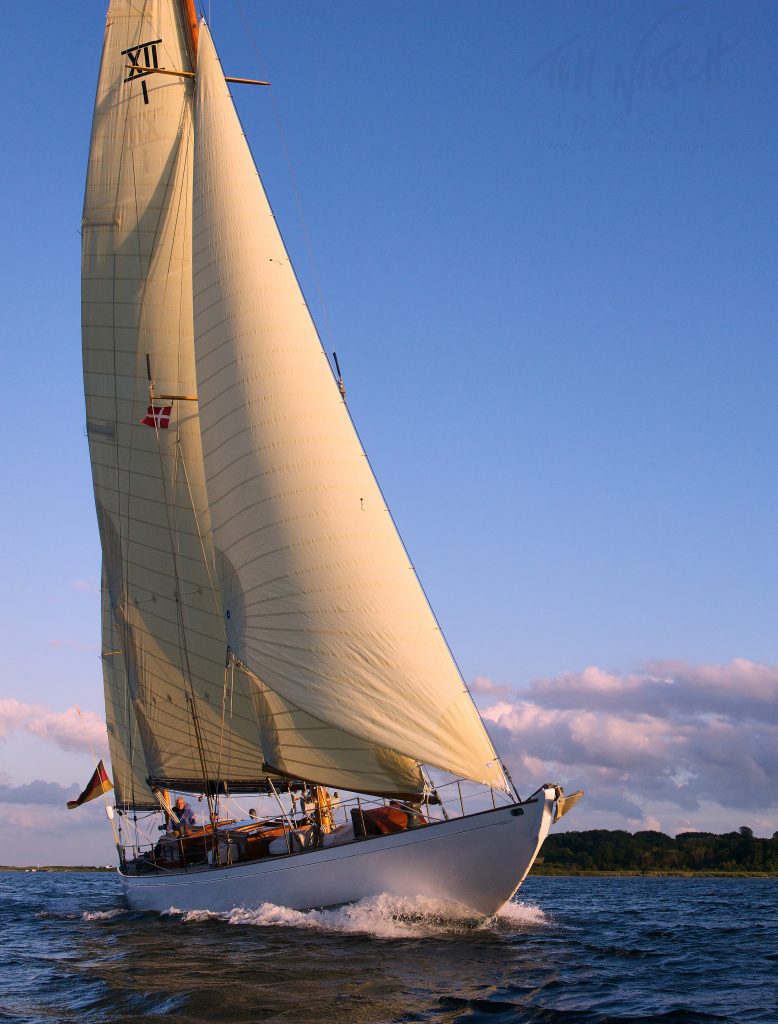 When we bought AR in 1982 she was considered a big yacht. We also saw her that way, but the yawl rig in combination with the boom-staysail made her easy to handle, especially after we changed the reefing system of the main. One can do it instead of a three-man crew as in former times. Also the anchoring equipment was adjusted. With the help of a hydraulic motor under the original windlass it is now a job for one instead of at least four in Henry’s days. Our general idea has been to keep her as original as possible and where she was not, to bring her back to the original state. At the same time however, we never intended to hide her age, her patina from all those years, the atmosphere of being a living thing. We never intended to make her look like new. 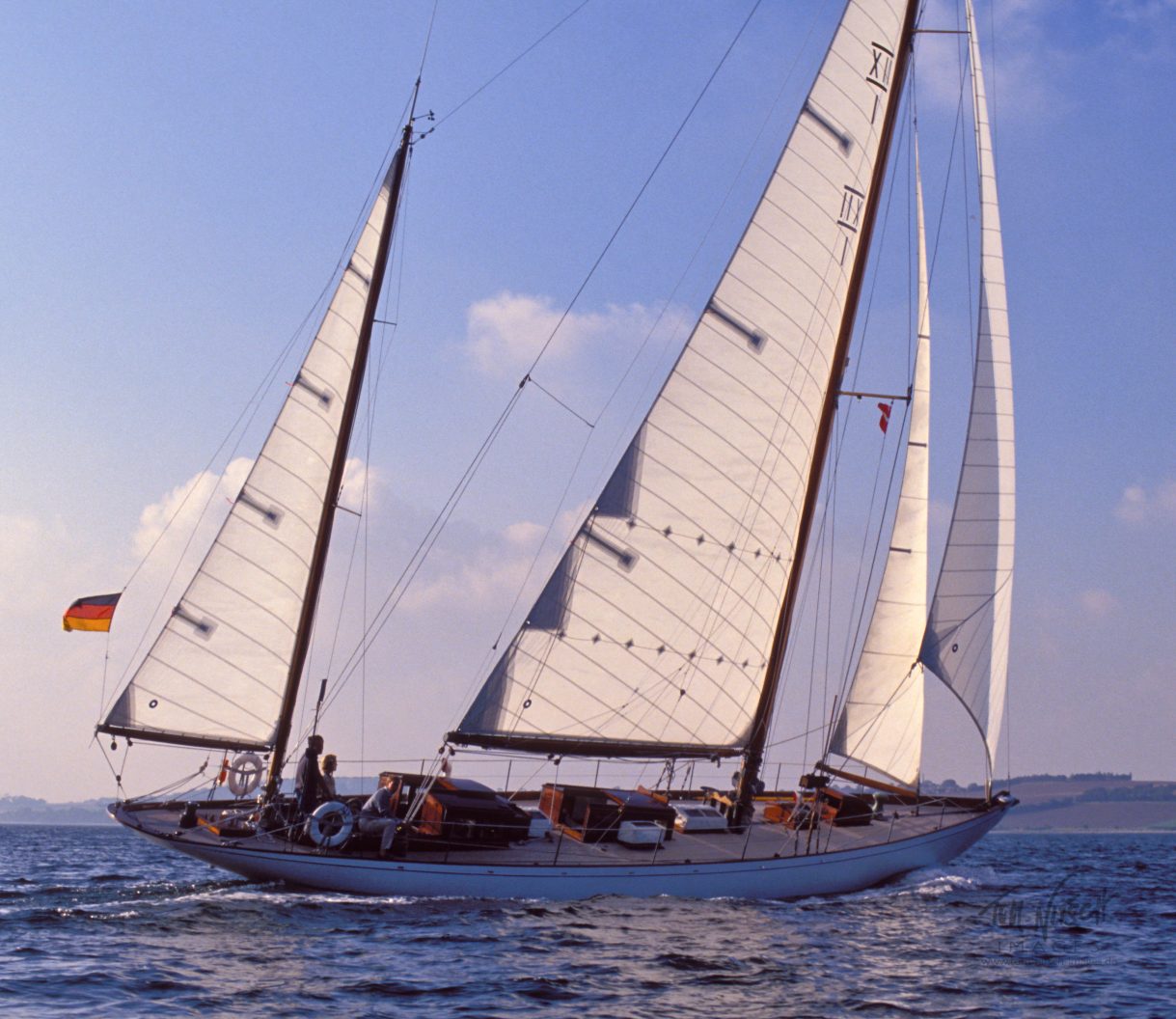 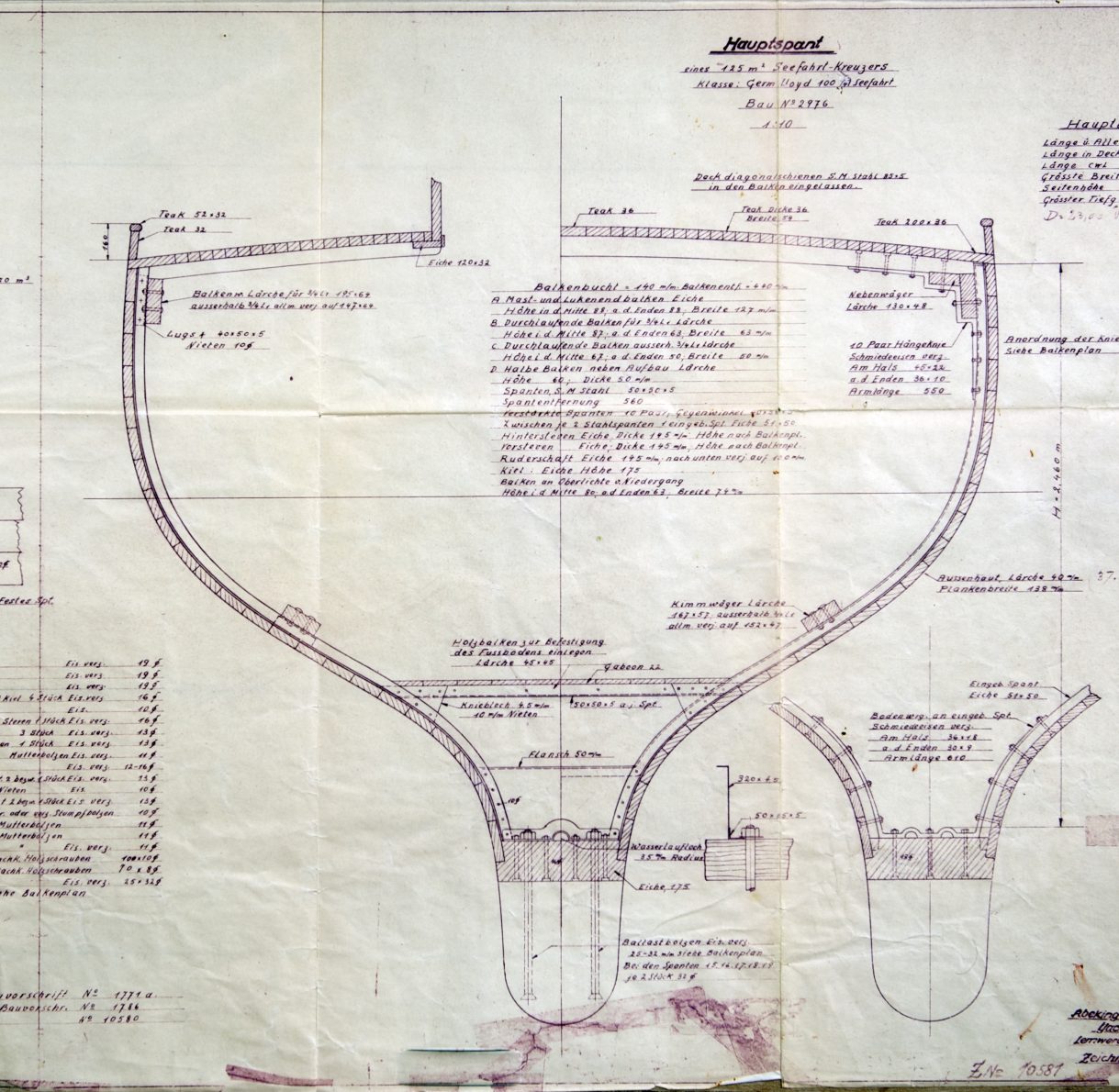 The semi-composite construction, steel- and oakframe in change, was the state of the art in those days. It saved a lot of weight – great for racing – plus it made the boat stronger at the same time. Rasmussen loved to build hulls with larch instead of mahagony and since he was building AR for himself this is what he did. The planking is 45 mm strong, a strength that always gave us the feeling of her being a very safe cruiser. 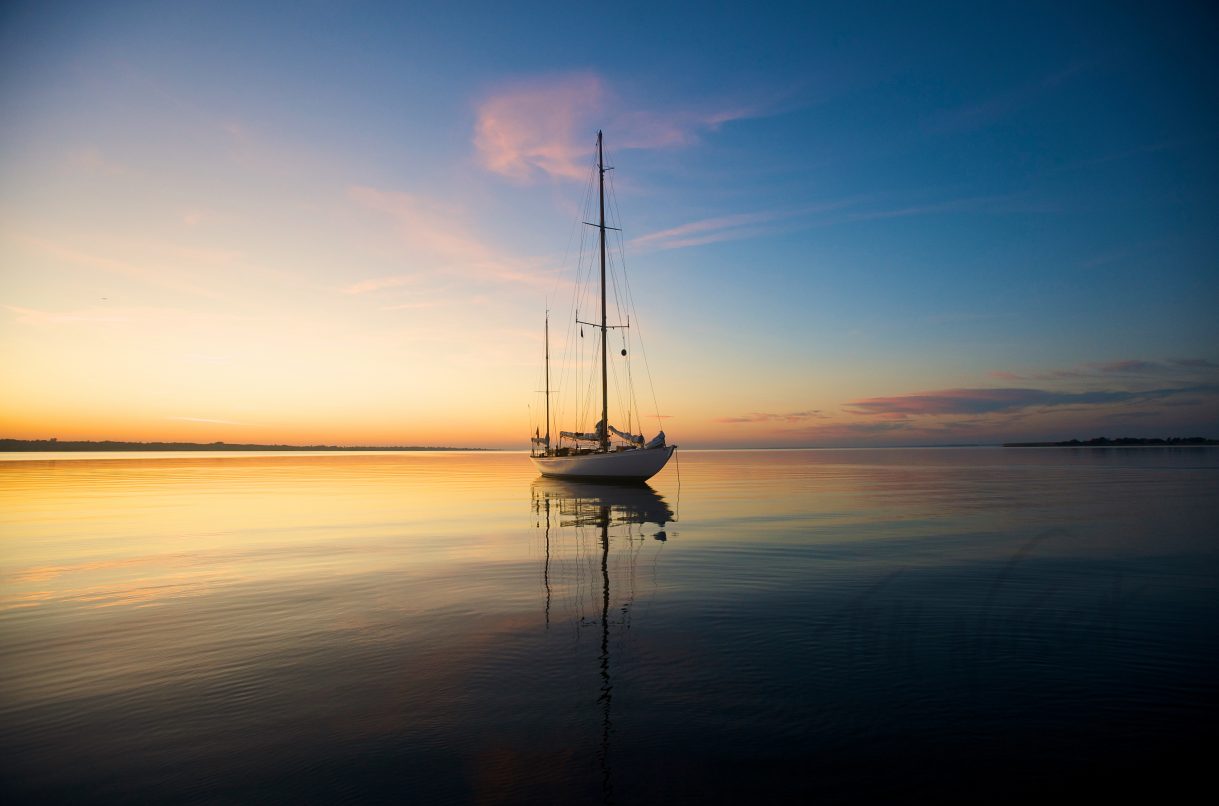 We enjoy the quietness of being alone at times as well as enjoying AR together with our friends. And even with 5 people on board the room and the arrangement of her accomodation allows one to find individual space when needed.

We enjoy the quietness of being alone at times as well as enjoying AR together with our friends. And even with 5 people on board the room and the arrangement of her accommodation allows one to find individual space when needed.